Book Launch
“Government Schemes for Child Protection in India” is published by Pacific Book International New Delhi which is Web-launched on Sunday, 14, 2020 at 4:00PM- 5:00PM through Zoom Meeting app.

‘Child Protection’ is about protecting children from or against any perceived or real danger or risk to their life, their parenthood and childhood. Looking at the sensitive issue Author Dr. Rubee Singh has tried to highlight about how the Government & NGOS are trying to control this social issue in her Book “Government Schemes for Child Protection in India” The book was launched by Honorable Guests who are in policy making, implementation and security set up.

Chief Guest for the occasion was the distinguished Founder Chairman – Nexus of Good Foundation, Former Secretary Government of India- Shri Anil Swarup (Rtd IAS)  in his address complimented the authors for having the vision and courage to speak on the social issues. He also advocated the need of Child protection & Child’s Right as – Children are the future of every country.

The speakers who have contributed their valuable insight on the topic were Urvashi Prasad Policy Specialist NITI Aayog, Govt. of India, Mr. Ashish Kumar Senior Faculty–Vision IAS, Founder–Trust IAS & Adv Sumitra Choudhary from Supreme Court of India. The panel discussion covered the policies & laws to protect the abounded children as stated in the Book. Also, it was discussed by Mr Ashish Kumar Founder of Trust IAS how the students will be benefited by the book who are preparing for UPSC Civil services, Law students and Police officers.

Gender equality is a human right which entitles all persons irrespective of their gender to live with dignity and with freedom. Gender equality is also a precondition for all round development and reducing poverty. Empowered women make invaluable contribution to the improvement of health conditions and educational status and productivity of whole families and communities, which in turn improve prospects for the next generation. The Millennium Development Goal also puts emphasis on gender equality and empowerment of women. It is now widely accepted that gender equality and women’s empowerment are fundamental cornerstones for achieving development results. Keeping the status of women empowerment and its determinants in India, in this paper an attempt is made to present some of the key determinants of inequalities that exist in our country so as to have an idea about to what extent the women are empowered.

Gender equality will be achieved only when women and men enjoy the same opportunities, rights and obligations in all spheres of life. This means sharing equally, power and influence, and having equal opportunities in economic and social spheres. Equal claim on education and career prospects will enable women to realize their personal ambitions. Gender equality demands the empowerment of women, with a focus on identifying and redressing power imbalances and giving women more autonomy to manage their own lives. When women are empowered, the whole family benefit, thus benefiting the society as a whole and these benefits often have a ripple effect on future generations.

According to Census-2011, India has reached the population of 1210 million, as against 301 million in 1951, of which 58,64,69,174 (48.5 %) were females. The population of India accounted for 17.5% of the total world population and occupied second place. The sex ratio was 930 in 1971 and it has increased to 940 according to 2011 Census. The female literacy also increased from 18.3% in 1961 to 74.0% in 2011 and a decrease in male-female literacy gap from 26.6% in 1981 to 16.7 per cent in 2011. Women empowerment in India is heavily dependent on many different variables that include geographical location rural & urban, educational status, social status (caste and class) and age. Policies on women empowerment exist at national, state and local levels in many sectors including health, education, economic opportunities, gender based violence and political participation. The scope and coverage of the schemes launched has been expanding that include initiatives for economic and social empowerment of women and for securing gender equality.

10. National Mission for Empowerment of Women

Education is the single most important factor to ensure gender equality and empowerment. Enrollment of girls in primary education, survival and transition to higher levels of education lead to achieving gender parity in education. The Gender Parity Index (GPI) is the ratio of the number of female students enrolled at primary, secondary and tertiary levels of education to the corresponding number of male student in each level. Thus GPI (based on GER) which is free from the effects of the population structure of the appropriate age group, provides picture of gender equality in education. Moreover a woman does not have the freedom to spend her spouse’s earnings and even her own earnings as per her choice and need. Gender equality and Women Empowerment in social and political fields. Greater participation of women in social and political sphere is essential to make the social and political institutions more representative. It serves as a tool for empowerment of women and contributes to gender sensitive decision making. As far as political participation is concerned, women have a poor representation in India s Lok Sabha (Lower House), Rajya Sabha (Upper House) and also in State Assemblies. A total of 62 females have been elected in the General Election 2014 constituting only 11.4% share in the Lok Sabha, while in the Rajya Sabha only 11.9% representatives are women at present. Similarly, women representation in the state assemblies and state councils is also very poor. On an average, in the states, women share is only 8% in assemblies and only 4% in state councils as on 1st August 2014. However, due to the reservation of one-third seats for women in all tiers of the Panchayati Raj Institutions (PRIs), representation of women in the PRIs has increased to 46.7% as on 1st March 2013. As far as women s participation in the judiciary is concerned, there were only 2 women judges out of 30 judges in the Supreme Court and only 58 women judges out of 609 judges in different High Courts with maximum 25% in Delhi High Court and no women judge in 6 High Courts as on 1st April 2014 (Women and Men in India, 2014).

ISSUES TO BE TACKLED FOR WOMEN EMPOWERMENT AND GENDER EQUALITY:-

In India women are discriminated and marginalized at every level of the society whether it is social participation, economic opportunity and economic participation, political participation, access to education or access to resources etc. Majority of Women in India are poor, uneducated and insufficiently trained. They often end up in the daily struggle of managing an ill equipped family and are not in a position to propel out themselves of the oppressive and regressive socio-economic conditions. Although lots of things are happening and large amount of resources are being spent in the name of women empowerment in India, the actual situation however, just remains the same and in many instances worsens further. Deep-rooted systemic challenges still remain to be addressed.

The literacy rate in terms of number of girls per 100 boys enrolled shows that during study period from 2010-11 to 2014-15, a remarkable progress has been identified at all levels of education. It can be said that 8 to 10% growth is recorded in upper primary, secondary and higher education during the study period. Gender Equality and Share of Women in economic participation and opportunity. Women’s participation in labour force is seen as a signal of declining discrimination and increasing empowerment of women. It is thought that feminization of the workforce is also a sign of improvement of women’s opportunities and position in society. Share of Women in Employment measures the degree to which labour markets are open to women in industry and service sectors, which affects not only equal employment opportunity for women but also economic efficiency through eligibility in the labour market and economic factors in social empowerment of women.

Women’s empowerment cannot take place unless women come together and decide to self-empower themselves. Women should come together as a unifying force and initiate self empowering actions at the ground level.

As women constitute almost one-half of India’s population, without their engagement and empowerment, rapid economic progress is out of the question. For economic growth to be really inclusive, women empowerment is of utmost value. It is crucial for achieving sustainable economic development of our country and even beyond. Still a large part of women do not have sufficient autonomy regarding the value choices for their own life.

1. To understand the level of equality among girls and boys in primary, secondary and higher education.

2. To know the Gender Equality and Share of women in economic participation and opportunity

3. To Identify the Gender Equality and Women accessibility to resources

4. To examine the Gender Equality and Women Empowerment in Political Field 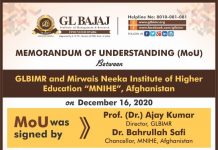 Memorandum of Understanding between GLBIMR and Mirwais Neeka Institute of Higher Education “MNIHE”, Afghanistan on December 16, 2020 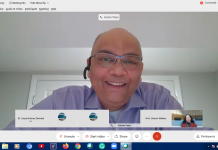 Global Expert Talk on the ‘Role of Technology Innovation and Change in Post COVID-19’, IMS Ghaziabad 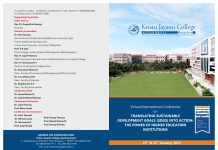 Virtual International Conference on SDG scheduled to be held on 22nd and 23rd January, 2021 at Kristu Jayanti College, Bengaluru